What Is the Minimum Wage In Denver, Colorado 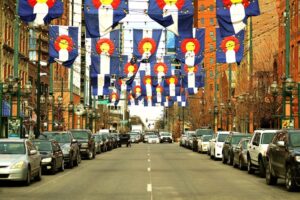 Have you ever wondered why Denver, Colorado is known as the “Mile High City?” Denver is situated exactly 5,280 feet, or one mile, above sea level. As a result of its elevation, Denver has over 300 days of sunshine and sunny weather annually. Denver also has over 200 beer breweries and microbreweries, which is the greatest number of breweries per capita relative to other cities. Also, you will get drunk easier because of Denver’s situational elevation and rarified air (alcohol will hit you 3% harder than at sea level). Do you love playing golf? Golf balls fly about 10% farther in Denver than in any city at sea level. The state capitol building in Denver was constructed with rose onyx, a material first discovered in Pueblo, Colorado in 1893. Since rose onyx has basically become depleted, the Denver Capitol is the only building to be adorned with the material. There are plenty of fun facts you should know about Denver, especially if you plan on moving there. And if you are planning to move there, then there is one question that you should ask; what is the minimum wage in Denver?

What is a Minimum Wage?

The minimum wage is a federally, state, or municipal mandated dollar per hour remuneration that must be paid as a baseline wage for eligible workers.

However, the state minimum can be higher or lower than the federal minimum wage depending on where you live. The U.S. Department of Labor has an interactive map where you can learn the minimum wage in each state.

Georgia and Wyoming are the only two states that pay a minimum wage well below the federal standard. Both states only pay a $5.15 minimum wage.

What Is the Minimum Wage in Denver?

The Denver City Council increased the local minimum wage to $14.77 per hour, however that wage standard applies to employment relative to the council’s purview.

What you should keep in mind that Denver has a high cost of living standard. If you are a single adult with no children, you would need to make at least $30,000 or more to make a living wage.

A living wage is the amount of amount you need to make to satisfy the current cost of living standards. And the cost-of-living standards of the city you live in could be a lot higher than what a minimum wage pays you.

And a one-bedroom apartment in Denver costs $1,064 a month.

The minimum wage in California is $14 an hour. However, there are several cities and counties in California that pay citizens $15 per hour.

Make sure you plan your personal budget and cost-of-living needs before moving to Denver or any other city.

Do you think the minimum wage in Arizona is high enough? Why or why not? Share your thoughts in the comments below.

What is The Minimum Wage In Arizona?

What is The Minimum Wage in Alaska?